Home / Uncategorized / Golovokin is keeping the pressure on Floyd Mayweather 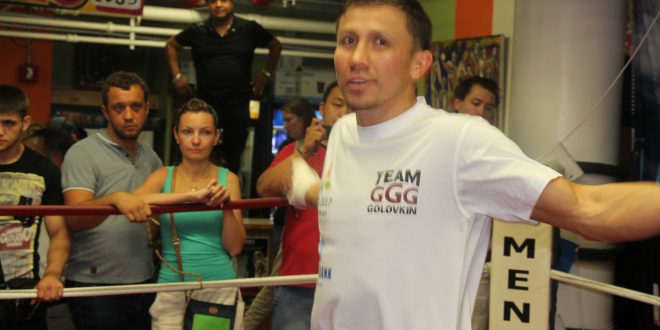 Golovokin is keeping the pressure on Floyd Mayweather

Dario Matias August 4, 2015 Uncategorized Comments Off on Golovokin is keeping the pressure on Floyd Mayweather 1,876 Views

Gennady Golovkin REALLY wants to get his fists on Floyd Mayweather.

In a move that most boxing fans will find surprising, Golovkin is already trying to trim down to 154 pounds in order to land a lucrative superfight showdown with Mayweather in September. According to several reports, the dominant and sensational Middleweight kingpin, believes he can safely make not only the junior middleweight limit of 154 but also that he can accept a proposed re-hydration clause which was previously mentioned by Floyd Mayweather Sr., just to make the Mayweather vs. Golovkin fight happen (GGG would  be a prohibited to re-hydrate to a much heavier fight night weight, as many weight drained, larger boxers customarily do).

This is a seriously bold move by Golovkin and it shows a fierce determination to sacrifice his natural size advantage to try to lure Mayweather into a highly anticipated superfight, which fans and media worldwide would be thrilled to witness.

It would also subjugate Mayweather’s media manipulation campaign of trying to propagandize the public into believing that little Floyd is just too small to face the big, strong bully Golovkin, who actually stands barely an inch taller than Mayweather, who is currently a beltholder at junior middleweight.

But on the other hand, Golovkin vs. Mayweather is such a fascinating and intriguing clash of super talents, it would without question be a spectacular success, and could generate revenues in the general range of any other historic superfight, and who knows, perhaps even the record-smashing numbers produced by the May 2 Pacquiao vs. Mayweather event.

Though it does seem unlikely for GGG vs. Floyd to happen, because of Mayweather’s inclination to staunchly avoid high risk fights – and a duel with GGG would be the riskiest night of Floyd’s career – this situation is very unique and there is cause for cautious optimism. Because Mayweather, who wants to extend his career for several more years, has no attractive, money-making options whatsoever, except for the Pacquiao rematch and a date with Golovkin.

Scoop’s new book “Muhammad Ali: Portrait Of A Champion” is available at amazon for $9.99.

Previous Pacquiao Must Sue Malignaggi For Slander And Defamation
Next Biofile: The Ricardo Mayorga Interview

Pacquiao Must Sue Malignaggi For Slander And Defamation
Biofile: The Ricardo Mayorga Interview