Bernard Hopkins Through The Eyes of Angelo Dundee 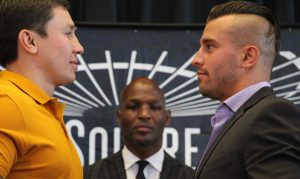 “He’s what you call a ‘perfect fighting machine.’ Boxing needs more people like that. He’s like a blessing.”

Greatness converged on greatness last week at the South Beach Gym in Miami. Living legend – Hall of Fame trainer Angelo Dundee came to watch the training session of Living legend – future Hall of Famer Bernard Hopkins. It was the first time Dundee had ever seen Hopkins at work, up-close, live and in-person. He had nothing but the highest of praise for Bernard Hopkins. “He’s a tremendously, immensely conditioned guy. He’s what you call a perfect fighting machine…He doesn’t look to take advantage (of sparring partners) – because he knows he’s superior. Boxing needs more people like that. He’s like a blessing…I love him…and he ain’t slowin’ down. He could be another George Foreman, Archie Moore type.”

Dundee: “That’s the first time I ran into that kid. He’s a Philly guy, I’m a Philly guy too, how could I not? I wanted to go over and say Hi. He sparred with my youngster David Estrada (15-1 welterweight). A guy like Bernard Hopkins is like a blessing for a young kid. ‘Cause he’s like a teacher. I really enjoyed him. Luis Rodriguez (former welterweight champ) was something like that. He could spar with anybody, he never hurt nobody. And these kids learn. David loved him. He loved the idea of working with him. Bernard works real nice in the gym. I love him. Beautiful smoothness, footwork, and heckuva jab. They went four or five rounds. It was terrific. It was a workout, it was nice. Watching it was like something you watch when you go to school. I thank Bernard Hopkins for working with that kid.”

Dundee: “I know the kid. Because I study all fighters. I read an awful lot. You guys keep me posted. So I appreciate it. I get all the clippings from Philly. ‘Cause my sister sends ’em to me. I’m aware of him. He’s a helluva guy, a tremendously, immensely conditioned guy. He knows how to take care of himself. He reminds me a little bit of George Foreman. He knows how to work for a guy his age (39 in January). And he don’t knock himself out. He trains in the gym. He’s what you call a perfect fighting machine. In the gym, he’s steady, steady, steady. He doesn’t look to take advantage. Because he knows he’s superior. Some of these guys want to be the king of the gym. Bernard Hopkins is not like that. It’s good to see that. Boxing needs more people like that. And he ain’t slowin’ down. He takes care of himself. He could be another George Foreman. George is talking about coming back. I got my training shoes ready. Ready to walk up those steps [laughs]. What I like about Bernard Hopkins is he has a smile on his face. It’s nice to be that way. His people around him are nice people too.”

Q – Do you think that with Vargas, De La Hoya and Mosley all not wanting to fight Hopkins yet that Bernard could very well be too good for his own good?

Dundee: “No, I wouldn’t say that. I think what happens is the time and the place. Too good…you’re never too good. He’s a very talented young man. And his theories are very good, the way he thinks, the way he talks.”

Q – Have you ever known of a 38-year-old fighter that was as good a physical specimen as Hopkins? He looks and moves and has the reflexes of a much younger fighter…

Dundee: “He does. I like what he does. George Foreman is the other guy who was a remarkable trainer. Kids know what to do with themselves. They know how to work. They know how to cut it off. George was the same way. And it’s a joy to see these guys around. Because we need ’em. I’m not surprised. I heard the adjectives he used. I heard the way he talks to the media. Archie Moore, God love him, got lucky late (won the world light heavyweight title at the age of 40 in 1952). When Archie Moore got old, that’s when he got lucky, the poor guy. I love Archie Moore. He used to fight Doc Williams (KO 7 in ’48), (KO 2) Esco Greenwood in in North Adams (in ’49) and Pittsfield. It’s the luxury I got being around that long. I used to watch him fight guys that nobody else would want to fight [laughs]. And that’s the only guys that would fight Archie Moore. ‘Cause he was such a great artist in there. Smart. Slick. He was the original guy that started the talking and everything. He was the guy that when a guy would win the title, he would write him a card and say, Welcome to the Championship Club!’ It was smart. I mean, he was a smart guy. Nice guy.”

Q – What makes Hopkins so good?

Dundee: “Well he comes from a good area, a good breeding ground. I had a couple of kids out of Philly. When I was a kid I used to watch Johnny Walker and Tony Fox work in the gym. And they used to take knockdowns every other day [laughs]. That was the theory. But Bernard’s not from that school. He’s smart. That’s why he’s around now.”

Previous Biofile: Danny Garcia Interview
Next Candid Ward Admits He Could Get Krushed by Kovalev

Boxing Should Hire Ex-Boxers To be Judges

Biofile: Danny Garcia Interview
Candid Ward Admits He Could Get Krushed by Kovalev