Carl Froch has first hand experience in the ring against George Groves and Chris Eubank Jr. who will lock horns in a fierce super middleweight world title showdown on February 17 at Manchester Arena in Manchester, England. The fight, which sold out in seven minutes, is also the semifinals of the World Boxing Super Series.

Froch stopped Groves in a pair of intense, thrilling contests in 2013 and 2014, and employed Eubank Jr. as his chief sparring partner in the lead up to the rematch with Groves. Familiar and respectful of the arsenals of each gladiator, Froch has an educated vision of how he anticipates the showdown will play out.

“I don’t think Groves has the capability to stop Chris Eubank Jr. and if you don’t stop him, you don’t win on points,” Froch penned in a recent column for Sky Sports.  “It’s mission impossible for Groves.”

Of course, it was supposed to be mission impossible for Buster Douglas against Mike Tyson and Lloyd Honeyghan against Donald Curry. And boxing is famously known as “the theater of the unexpected.”

Eubank Jr. has been installed as the betting favorite however MyTopSportsbooks.com writer Eaton Thatcher is favoring George Groves   despite the fact that Groves himself admittedly accepts his underdog status for the bout.  Thatcher believes veteran “Saint George” has a few more good fights left in him. Power has never been Eubank Jr.’s strong suit, even at middleweight, and that could seriously haunt him in the higher weight class.

Groves, 27-3 (20 KO’s) is an passionate, tenacious fighter, difficult to predict. The 29-year-old won his WBA world title on the fourth attempt – after the two defeats to Froch and a split decision loss to Badou Jack in 2015 – by stopping Fedor Chudinov in the sixth round despite a broken jaw suffered in the third round of the action-packed fight in late 2016.

Eubank Jr, is the son of the popular, dominant British former super middleweight kingpin. At age 28, Eubank Jr. has a 26-1 (20 KO’s) record, including a 12th round TKO of Chudinov and a split decision loss to Billy Joe Saunders in a WBO Eliminator in 2014. Saunders is now the WBO champion and fresh off an impressive decision win against David Lemieux.

Eubank is a skilled boxer, with excellent handspeed, punch variety, and an exhausting, relentless workrate. He never stops throwing punches and challenging, probing, testing his opponent’s ability, will, and fitness. Another strength of Eubank Jr. is he is sturdily built and can endure the heaviest of hits. Froch said he landed his very best right hands in sparring but he was unable to hurt Eubank Jr. Froch stated that he had more difficulty sparring Eubank Jr. in the bigger gloves than he encountered in his two real fights with Groves.

Groves is a talented, quality, successful technical boxer as well but their are questions about his stamina and physical fortitude in a long, grueling, physically demanding fight. While it’s known that Eubank Jr. can sustain his aggressive boxing tactics for the full twelve rounds, Groves has shown vulnerabilities in the deep ends of two of his world title fights against Froch. And that remains an area of concern for Groves who may need to make changes to his nutritional regimen. 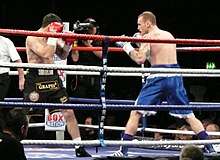