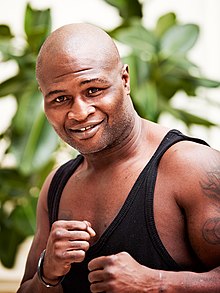 All-time great champion James Toney admits professional boxing is in a down slide right now and he has solution ideas to remedy the sport and return it to the glory days of the 70s, 80s and 90s.

“We have to do better, all these great fighters – or those who claim to be great, are all fighting bums,” Toney said in an interview with Cody Vidal’s podcast. “(Errol) Spence – that boy is bad. (Keith) Thurman – he likes to fight. Put ’em together and make ’em fight. We need great fights.”

Toney fondly remembers the eras that inspired him to become one of the all time greatest champions in ring history. “Hagler-Hearns, Foreman-Lyle, Alexis Arguello-Aaron Pryor…those are the fights I came up watching and enjoying. And I couldn’t wait to see the next one,” Toney reminisced, about being inspired to achieve his incomparable career which ranged from 157-pound middleweight in the late 80s all the way to top heavyweight contender. Still active, Toney won the WBF Heavyweight title in March 2017 with a sixth round TKO of Mike Sheppard.

“We need to make fights like those to bring our fans back. Our fans are going to UFC,” noted Toney. “Boxing is the number one sport in the world as far as heart and dedication.”

Toney, a three time world champion, is 49 years old and has a ring record of 77-10-3. He said he would like to be remembered “as one of the greatest fighters of all time. I never ducked anybody, I fought everybody. I was born to fight. I also like being cool, nice to everybody. I like having fun. But I still love knockin’ people out.”