Home / ring observations / Scoop Malinowski / Is it a Conspiracy to Screw Golovkin? 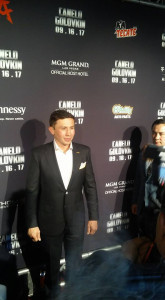 Is it a Conspiracy to Screw Golovkin?

Gennady Golovkin has done everything by the book, followed the rules and became a boxing superstar.

Unlike Canelo Alvarez who was shoe-horned in by the powers-that-be to be the next big cash cow franchise revenue maker.

Golovkin and Alvarez have been on a collision course for a long time since they sparred about seven or eight years ago. Alvarez ducked the showdown with GGG for years until last year when they finally clashed in what looked like a controlled sparring session. The rematch was finally set for May 5 but, perhaps conveniently, Alvarez tested positive for Clembuterol and has withdrawn from the rematch. The WBC has accepted Canelo’s excuse that he ingested the illegal performance enhancing drug via contaminated meat and did not punish or suspend or accuse the Mexican of being a drug cheat.

Golovkin is ready for a fight and wants to perform in the ring and May 5. He just turned 36 and is in top shape, and his prime is quickly dwindling away.  He understandably does not want to wait around for the supposed Canelo rematch in September. If you were Golovkin, would you trust Alvarez and Oscar De La Hoya to show up in September? Or could another smokescreen drama suddenly develop to postpone that date too?

Golovkin’s promoter wants to set up a fight with a substitute for Alvarez, such as Vanes Matirosyan but the WBC has not accepted any opponents so far. Now there is speculation that the IBF will strip Golovkin of his IBF belt if he opts to fight anyone but mandatory challenger Sergiy Derevyenchenko on May 5.

It’s astonishing that Golovkin, who has followed all the rules, is being punished now by the sanctioning bodies. If anyone deserves an easy fight right now against a cupcake patsy it’s Golovkin. With the sanctioning bodies now resisting permission to Golovkin to fill the opponent vacancy for the May 5 date suggests that this entire Canelo PED drama could be an orchestrated conspiracy to screw Golovkin and cheat him out of the precious, valuable time left in his prime.

Let’s face it, everyone knows Alvarez is the long-term money maker for the industry powers-that-be. And to help Alvarez in any way possible to beat Golovkin in the rematch would be in the best interests in everybody who stands to profit by Alvarez maintaining his existence as the cash cow, franchise money maker – the sanctioning bodies, TV network, host venues, Canelo endorsers, local economies.

It’s absolutely disgusting that the powers-that-be are roadblocking Golovkin from fighting on the May 5 date. And it’s highly suspicious that the sanctioning bodies apparently want to bypass their sanctioning fee for any Golovkin fight on May 5.

I smell a rat. A filthy, dirty, corrupt rat.