The Week In Boxing 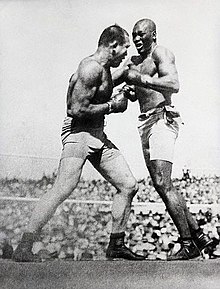 United States president Donald Trump issued a presidential pardon for former Heavyweight champion Jack Johnson for his conviction of violating the Mann Act in 1913 of transporting a white woman across state lines for “immoral purposes.” Heavyweight legend Lennox Lewis, Rocky star Sylvester Stallone and WBC champ Deontay Wilder, taking a day off from ducking Anthony Joshua, were on hand in Washington DC to attend the ceremony at The White House.

Oscar De la Hoya is now saying Gennady Golovkin doesn’t want to reschedule the Canelo Alvarez rematch. “It’s clear to us that Golovkin doesn’t want to fight Canelo,” De La Hoya said to The Ring.“It’s clear to us that after all the demands that they made, after Canelo having to do the hair follicle test, having to enroll in VADA, having to be tested by the Nevada State Athletic Commission randomly even before he was enrolled in VADA, it’s clear that GGG is afraid.  So we’re going to move on.” GGG promoter Tom Loeffler responded to The Ring:  “If they want to go in a different direction, they’re entitled to, but I think that speaks more to Canelo,” Loeffler said.  “GGG is not afraid to fight anybody in the middleweight division. He made a lot of (financial) sacrifices for the first fight and the rematch. And since the rematch was cancelled he wants a more equitable percentage.”

Top Rank’s head honcho isn’t about to let Adonis Stevenson dodge his man Oleksander Gvozdyk, by doing a rematch with Badou Jack.  “Stevenson retained the title, he has to fight us now, we’re trying to get this done,” said Arum to BoxingScene.com.  “We’re not going to be negative about this – we know Stevenson can’t come to the United States. So we’re not going to threaten him where if we win the purse bid and then put the fight in the United States and ‘you can’t come, so you’ll lose your title’. We wouldn’t do that.  “So what we’re suggesting is we’re willing to put the fight on, either making a deal with Yvon Michel, who is the promoter or going to purse bid. And our idea is to put the fight on in Kiev in conjunction with the WBC annual convention.” Arum admitted it’s unlikely Stevenson will fight the mandatory Ukrainian in Ukraine: “If he doesn’t want to, we go to purse bid, we win the purse bid we would certainly do it in Ukraine, right? Not in the United States, in the Ukraine. He can either go through with it or give up his title. If they win the purse bid, or they can offer us enough money, Gvozdyk will go to Canada and fight him in Canada.”

Author of six books including "Muhammad Ali: Portrait of a Champion" and "Heavyweight Armageddon: The Lewis versus Tyson Championship Battle" available at amazon
@scoopmalinowski
Previous Ali’s Deer Lake Camp Ready To Re-Open
Next Oscar Desperately Trying To Save Canelo from Golovkin