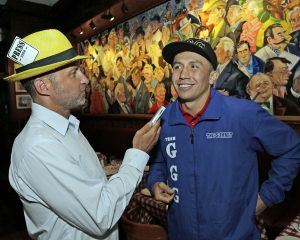 Hopkins referred to Golovkin as a “caveman” which is a black supremacist insult frequently used by controversial Nation of Islam leader Louis Farrakhan who has said some crazy statements in the past, such as all white people are cavemen and the Jews deserved the holocaust.

Hopkins is no stranger to making racial taunts and insults. Before his fight with Joe Calzaghe of Wales, Hopkins boasted to the media that “I will never lose to a white boy.” Hopkins lost a close decision to Calzaghe in Las Vegas.

In the last fight of his career two years ago Hopkins was knocked out of the ring by Joe Smith, a white light heavyweight contender from Long Island. It was a humiliating end to a Hall of Fame career.

So far the mainstream media has not picked up on the story of Hopkins calling Golovkin a caveman, which to some sensitive people could be considered as racially explosive as certain wacky evolution theories about the origins of black people.

Author of six books including "Muhammad Ali: Portrait of a Champion" and "Heavyweight Armageddon: The Lewis versus Tyson Championship Battle" available at amazon
@scoopmalinowski
Previous Grudge, Wrath, Tension, Canelo vs Golovkin II Has it All
Next Did Golovkin Imply Oscar, WBC, Canelo are all Corrupt Cheats?

Grudge, Wrath, Tension, Canelo vs Golovkin II Has it All
Did Golovkin Imply Oscar, WBC, Canelo are all Corrupt Cheats?