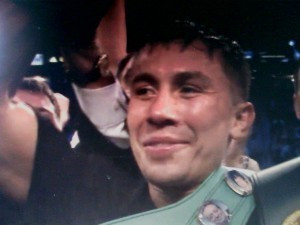 Did Golovkin Imply Oscar, WBC, Canelo are all Corrupt Cheats?

“So many people show me their true face during and after the first fight with Canelo. I am talking about lots of different people. I know who I am and I know who Canelo is, and what he has become. I know what kind of people I am dealing with in this rematch, what everyone is about. I do not think about the first fight anymore. I did not lose that fight. I walked out of the ring with all my belts, still the world champion,” said Golovkin.

Everybody knows Canelo is the American boxing establishment cash cow A + franchise with the long term earning power. Everybody knows Golovkin, 36, is the unwelcome foreigner with not much time left as an A –  side star. On the chessboard, Canelo is the king, Golovkin is the pawn.

It’s easy to connect those dots. The boxing mafia calls the shots and Golovkin has to dance to the tunes of the business plan agenda. If you want the big money you have to play by our rules.

Golovkin basically told us without words what Oscar, Sulaiman, HBO and Canelo are. Are they all corrupt, lying, greedy, dishonorable cheats who will do anything to sustain their money maker?

Did they force Golovkin to sign to fight Canelo twice knowing he would not be allowed to win?

What would happen to Canelo if Golovkin won both decisions? Would he now be a B side with no leverage and a massive loss of fan support and earning potential?

So now that Canelo has won (or stole) Golovkin’s belts, who profits the most, HBO, WBC, Nevada Tourism, Las Vegas gambling syndicates, Golden Boy promotions? Or do they all look forward to further profits and revenues based on many more Canelo Alvarez events?

There’s no justifiable reason to see a third GGG vs Canelo match because we already know the result. Just like Mayweather, just like Wilder, there is no way on earth, the American boxing establishment will ever let Canelo lose to a 36 year old fighter they do not control.

Golovkin tried to tell us what kind of people Oscar, Canelo, Sulaiman, HBO, Kellerman, Jones, Hopkins, Lampley really are without using the words. But he didn’t really have to. If you can read between lines and understand the way boxing works in America today, you know exactly what he was saying.

The American boxing establishment is so strong and mighty that even Bernard Hopkins, after decades of fighting the system and at times beating it, in the end Hopkins surrendered and sold himself out and joined that system. Even Bernard Hopkins bowed to his knees and sold out.

Golovkin looked almost depressed and bored on Saturday night when he entered the ring, his spirit was dead. He looked exactly like a fighter who knew he had been forced by a corrupt system to lose to the inferior yet protected franchise.

The world will never know that Gennady Golovkin is one of the greatest champions in boxing history. Unfortunately, he didn’t come from the right country, he didn’t have the right connections, and in the end, the media and system stabbed him in the back.