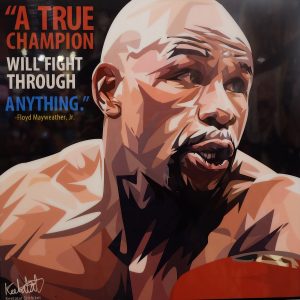 Floyd Mayweather has un-retired again for, what is it, the tenth time now?

The American fraud thinks the public wants to pay again to see him box against a controlled patsy. This time Mayweather has handpicked a Japanese featherweight kickboxer named Tenshin Nasukawa to serve as his hired punching bag. The “fight” will supposedly take place in Tokyo, Japan on December 31.

This is a business move most likely copied from Muhammad Ali, who picked a cross sport match against pro wrestler Antonio Inoki in 1976.

His most famous bout was against heavyweight boxing champion Muhammad Ali on June 26, 1976 in Tokyo.  Inoki initially promised Ali a rigged match to get him to fight in Japan, but when the deal materialized, Ali’s camp feared that Inoki would turn the fight into a shoot, which many believe was Inoki’s intention. Ali visited a professional wrestling match involving Inoki and witnessed Inoki’s grappling ability. The rules of the match were announced several months in advance. Two days before the match, however, several new rules were added which severely limited the moves that each man could perform. A rule change that had a major effect on the outcome of this match was that Inoki could only throw a kick if one of his knees was on the ground. In the match, Ali landed a total of six punches to Inoki, and Inoki kept to his back in a defensive position almost the full duration of the match of 15 rounds, hitting Ali with a low kick repeatedly. The bout ended in a draw, 3–3. Ali left without a press conference and suffered damage to his legs as a result of Inoki’s repeated kicks

One can only imagine if the greatest boxing champion in history could get tricked into a fraud fight with a pro wrestler, just what is Mayweather getting himself into here with a featherweight kickboxer?

It remains to be seen if the Japanese public are dumb enough to waste their time watching this circus.

What will be next from Mayweather?  A fight against Ronda Rousey or some other woman? A full time acting job in WWE? An unsanctioned fight with a kangaroo? A pillow fight with Mike Tyson for the WBA Interim regular diamond silver Intercontinental title?

Author of six books including "Muhammad Ali: Portrait of a Champion" and "Heavyweight Armageddon: The Lewis versus Tyson Championship Battle" available at amazon
@scoopmalinowski
Previous Five questions about Wilder vs Fury
Next How Haymon Ruins Careers

Five questions about Wilder vs Fury
How Haymon Ruins Careers