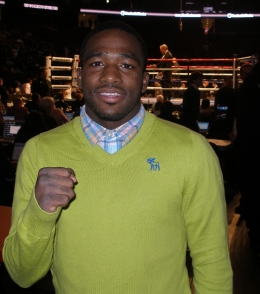 Over a month ago, Adrien Broner made an outrageous demand of $100,000,000 to fight Manny Pacquiao.

But the controversial former champion has severely lowered his demands and accepted a fight with Pacquiao for January of 2019.

“It’s gonna be a hell of a fight,” Broner said during a press conference in Manhattan to promote their Showtime Pay-Per-View bout. “All bullsh*t aside, I’m not coming to just pick up a check. F*** the money. I know when I win this fight, it’s more money to come.”

Astute ring observers have to be wondering what triggered the bone-headed Broner to come to his senses to lower his demands?

A knockout loss to Pacquiao pretty much ends Broner’s career as he would become irrelevant as a talented but idiotic misfit freak prone to getting in trouble outside the ring.

But a win for Broner changes his career and makes him a star who Haymon could use as a potential seller.

Still, considering the terrible image and reputation Broner has, he may never be a seller regardless of how good he looks vs Pacquiao. Villains sell but Broner is beyond a villain at this point, he’s one of the most disgusting and repulsive figures in sports history. A rep of the WBC said Broner is by far the worst behaved athlete he’s ever seen in the sport in decades. Broner’s act will only appeal to a very, very small audience.

Astute ring observers have to wonder what Al Haymon has up  his sleeve for this fight.  With Haymon, there are always long term plans and schemes. Nothing is left to chance.

Is Haymon using this as a set-up to later match Pacquiao with Mayweather but also to raise the value of Broner’s faded star power? Is Haymon actually setting up Pacquiao with the intent and hope that Broner can beat the aging Filipino legend? Most likely, the way Haymon operates, he will try to raise the value of each combatant in this event. The best way to do that would be an exciting sparring session where both look good and Pacquiao wins a close decision, therefore relaunching Broner as a star, and generating valuable momentum for the Pacquiao vs Mayweather rematch, probably in the summer.

Pacquiao vs Broner is an interesting fight, if it’s a hundred percent authentic. With Broner reducing his asking price from a $100m, one has to wonder what sort of enticements helped him make that curious compromise?

Author of six books including "Muhammad Ali: Portrait of a Champion" and "Heavyweight Armageddon: The Lewis versus Tyson Championship Battle" available at amazon
@scoopmalinowski
Previous Haymon’s Cowardice Exposed If He Blocks Spence vs Crawford Now
Next Fury Has Self Doubts, Leaves Door Open For Loss

Haymon’s Cowardice Exposed If He Blocks Spence vs Crawford Now
Fury Has Self Doubts, Leaves Door Open For Loss