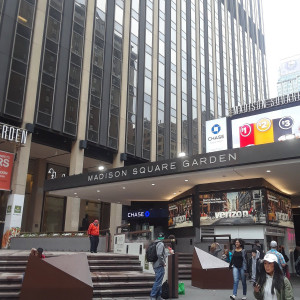 There is an old adage in boxing that was demonstrated once again last night in Madison Square Garden…”Great fighters have trouble getting fully motivated for mediocre fights.” Angelo Dundee shared this unforgettable pearl of wisdom to me many years ago.

Wladimir Klitschko and Lennox Lewis were recent victims of this strange boxing reality  and last night it was Anthony Joshua who became the latest to fall from the mountain top.

Let’s review a bit of boxing history first. Klitschko was dominating in the early 2000s, so brutally destructive that opponents were running from the chance to fight for his heavyweight title. Klitschko had four or five opponents reject offers until finally the South African journeyman Corrie Sanders stepped up. Klitschko’s complacence at being so utterly superior caught up with him in the form of the Sanders’ straight lefts which stopped him in round two. Of course we know what happened after, Klitschko regained those fraction of lost passion, spirit and eliminated that sense of complacence which taught him a very valuable lesson.

Lennox Lewis also grew complacent in the mid 1990s because he was being frozen out of the big fights by Evander Holyfield, Riddick Bowe and Mike Tyson.  Lewis got stung twice because of his complacence, first by Oliver McCall and then again by Hasim Rahman. But both times, Lewis rectified the problem and destroyed both McCall and Rahman in rematches.

I am certain Anthony Joshua’s TKO loss last night to Andy Ruiz was caused by the same mental complacence we saw befall Lewis and Wladimir Klitschko. Take nothing away from Ruiz, he had the courage and bravery to dare to be great and fought the fight of his life. He is a very good fighter. But not a great fighter.

Joshua has been trying and trying to fight the best opponents, the most dangerous challengers to no avail because Deontay Wilder, Tyson Fury and Luis Ortiz all ran away from gigantic money offers. So Joshua had to take what he could get, a minor, meaningless, mediocre title defense against a fat guy named Andy Ruiz that, let’s be honest, nobody really wanted to see. It was a “mediocre” heavyweight fight, nobody can deny this.

It’s a crying shame that Wilder, Fury and Ortiz did not have a fraction of the courage, confidence and bravery to dare to be great that Andy Ruiz had to sign the contract to fight Joshua.  It’s also a crying shame that Wilder’s protectors Al Haymon and Shelly Finkel also lacked an iota of courage, confidence and bravery to risk their cash cow Wilder with Joshua last night.  But of course they all know Wilder had no chance to beat Joshua and that is precisely why they refused to commit to ever fighting Joshua.

Yes I believe the blatant and obscene ducking by Wilder and Fury played a part in Joshua’s disappointing performance last night. Wilder and Fury both have made it clear they have no plans to fight Joshua for years if ever and that disappointing reality, in my opinion, has diminished the spirit, passion and energy of Joshua by fractions. “Prowess without an adversary shrivels.” – Seneca

Now that Joshua has something to prove and he is threatened, I expect to see his best fighting skills, as he showed against Wladimir Klitschko.  The same skills and domination that terrified Wilder, Fury and Ortiz to run away like cowards from massive monster career high paydays.

Joshua is far from finished. This was a wake up call, this was a lesson that he needed to learn to become a true great. Losing to Ruiz is a blessing in disguise.

I am sure that Joshua will bounce back from this and show his true colors. He has a guaranteed immediate rematch with Ruiz, who refused to commit to honor that rematch last night which indicates the new Mexican American champion is already, in his moment of ultimate conquest, showing a lack of confidence and that he realizes his monumental triumph was really a lucky, fluke victory last night. He has to honor the rematch clause and do it again.

Anthony Joshua has greatness in him. No matter what lies and deception Wilder and his protectors will say in the coming days, never lose sight of the truth that they have ducked Joshua for years with nothing but lies, deception, excuses and BS.

And there is a reason for that. Anthony Joshua is a beast. He may have lost last night but his career is far from over. Just like when Lennox Lewis and Wladimir Klitschko lost, they learned valuable lessons from their losses and used them as fuel, motivation and inspiration to produce some of the greatest performances in heavyweight history.