A Quick Chat With Larry Holmes 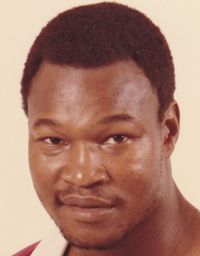 Earlier this year John McEnroe’s agent asked for the phone number for the just turned 70, Larry Holmes. I dug up the number and decided to give the former world heavyweight champion (from 1978-1985, 20 successful title defenses) a ring myself, to talk about a few things, like his memories of LeRoy Neiman, if he every played tennis, and if it’s possible that Larry Holmes is the greatest?

Larry Holmes on LeRoy Neiman:  “He liked boxing. Maybe more than anything else. Because he was always there at every major fight. At every party he was there.  Matter of fact, I got a picture from him (of me) dancing with my wife. I don’t know why it took so long to write about him. Like me, out of sight, out of mind. A lot of people are like that. Forgotten. I could say that about me but I’m not. If I don’t see someone, I’ll ask about them. I don’t forget LeRoy. I can’t. I didn’t like him because of his artwork. I liked him because of his personality. The picture he did of me and my wife is still on my wall. And it will be on our wall till we are not here anymore. A lot of people come to our house and ask me, Did you know LeRoy? Of course, I knew LeRoy. He was a great man. Always had my respect. I didn’t know he passed until I asked. Nobody told me anything. I don’t get the news, I don’t read the papers much.”
Question:  Do you remember the first the first time you met LeRoy?
Larry Holmes:  “I wish I did. When I met him I remember I know we hit it off. I respected him, he respected me. I was just a little guy trying to become champion. He treated me like I was the champion. Yeah, LeRoy was good. A good guy.”
*****
Two days before I played tennis with a friend Fred Gordon in Riverdale in the Bronx and we talked a little boxing in the warm up and how it’s possible the champ of our childhood, Larry Holmes, 69-6 with 44 KOs, might have been better than Muhammad Ali. That despite all the media lionization and uproar and ESPN Classic rebroadcasts of Ali’s big fights, it’s entirely possible that Larry Holmes was actually the superior champion. By the way, why doesn’t ESPN Classic ever re-televise Holmes vs Norton or Holmes vs Shavers?
Larry’s thoughts:  “I tell you how I think. I think I was better than most of the guys. That’s me thinking it. But most of the people don’t want you to think that highly of yourself. When I was on top, I was the baddest man on the planet. People don’t want you to think that but I did anyway. When people say Ali was the greatest, I don’t ever mention my name in there. Ali was great, a great person. But time runs out on people.”
*****
I told Larry that I gave John McEnroe his number several months ago but he revealed that the tennis icon did not call him. Remembering that McEnroe sat next to Larry Holmes in the front row at the 1981 classic Sugar Ray Leonard vs Thomas Hearns fight in Las Vegas, it evoked some memories from the Easton Assassin.
“John McEnroe is why I watched tennis on TV. He got me into watching tennis because he was crazy. Not crazy crazy but crazy [smiles]. If it wasn’t for him, I would have never watched it. When he played, if it was on TV, I watched him. He came to a couple of fights in Vegas. He was nice. I just liked him.”
When asked if seeing McEnroe inspired himself to try his hand at the racquet sport, Holmes revealed that yes he did almost become a tennis player but his plan did not quite materialize. “No. I thought I was going to start playing. I built a tennis court in my yard. But that’s as far as we got – talking about it.”
Larry Holmes 2019-11-25
Scoop Malinowski
Share

Author of six books including "Muhammad Ali: Portrait of a Champion" and "Heavyweight Armageddon: The Lewis versus Tyson Championship Battle" available at amazon
@scoopmalinowski
Previous Scoop Archive: Holyfield Happy To See Changes In Old Rival Tyson
Next Why Did Pay Per View Die?