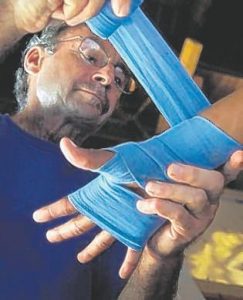 A couple of years ago I finally picked up Maria Sharapova’s book “Unstoppable.” It was a superb read with many surprises and highlights. One particular highlight was a photo Maria placed in the book, it was of her at age eight boxing with the renowned Sarasota boxing coach Harold Wilen.

I know Wilen from the early 2000s when our paths crossed a few times in regards to a junior Olympic boxing champion from Sarasota I was helping manage. I contacted Wilen to inform him of his inclusion in Maria’s book, a very special honor.

Yesterday I made an appointment to revisit Wilen at his (temprorarily closed) gym on Mango Street near downtown Sarasota to talk about his memories of training the eight year old Maria on the finer points of the sweet science.

As we sat on the shaded loading dock of a warehouse converted to a gym, amid a mess of gigantic tires, some weighing 750 and 800 pounds, we discussed some very old memories.

“Maria was eleven when she came here. The book said she was eight,” the recently inducted Florida Boxing Hall of Fame trainer recalled. “So I don’t know where that misunderstanding came from. At the time she came with her father Yuri. He said she was eleven. I don’t remember her first day, just the cumulative of better than nine months she came here.”

Even at a young age, Maria showed the extraordinary drive which tennis fans are so familiar with now. “What stood out about her was her incredible work ethic. And whenever her father – because he knew her better than anybody – when her father felt she wasn’t giving me maximum effort, he’d shout at the top of his lungs, “MA RI AAHHH!!!!” And she was startled and she started to work harder.”

I asked Harold how the Russian father with the little girl found out about his typically rugged-looking, hardcorem blood sweat and tears boxing gym which was then located a couple of blocks from the ritzy downtown Sarasota area (the gym has since been relocated two more times a few blocks away). “Some kind of way they knew that I worked with other tennis players which I had, who came from Bollettieri. That was the initial impetus to check me out in terms of Maria training with boxing to improve her tennis game.”

The veteran boxing figure now in his 60s or 70s, who has worked with dozens of world class contenders and a few world title challengers, still remembers the specific exercises he taught the young Sharapova. “We hit the mitts to get an idea of her athleticism. Working her to her physical limit, like non-stop punching. So that’s all for the good to strengthen her upper body, to strengthen her forehand, backhand, whatever. We also did agility drills for footwork which is inherent in boxing and tennis.”

Maria came to Wilen’s gym for over nine months but he never saw her again in person, only playing on TV. “I’m not surprised by what she has accomplished by what I saw of her work ethic and progression from what I saw at the age of eleven…that she told me and her father told me she was, to what she became. It would be a big thing to see her again.”

Wilen says he was honored to see himself on the page of her book in print and photo, “but my name was spelt wrong, instead of Harold it was spelled as Herald.”

The lasting memory of Maria? “Her incredible work ethic. I never saw her lazy. Her father saw it but I didn’t see it. I still remember hearing him yell MARIA!!! at the top of his lungs.”

Then in 2006 or 2007 another famous female tennis star appeared at the Sarasota Boxing Club. “A man called me on the phone to set up an appointment for Serena Williams to take a private lesson. She was rehabbing a knee injury in either 2006 or 2007. She came four times. By the fifth one she didn’t call or come. I tried to contact her but didn’t. I don’t know what happened but we had four private lessons (at a $100 per).”

Wilen was impressed by the power, speed and intensity of Serena and one day asked if she ever considered changing sports from tennis to professional boxing? He still remembers her reply, word for word…”I don’t want to get hit in my face.”

Wilen did not get much of a sense of Serena’s personality while they worked together. “Hard for me to say as a person, what stood out about her. Just her athleticism stood out for me. There was respect, mutual respect shown during the four sessions.”

Having seen both Maria and Serena up close and personal training in the ultimate realm of one on one physical competition, I asked Wilen who showed the superior skills? “Hard to say. Given the different ages. I’d say Serena. She was a woman with all the developed fast twitch muscles Maria didn’t have at that age.”

How about if he trained both for a week now for a boxing match who wins? “Similar age…I’d go with Serena. Given power.”

Power is vital in boxing. As I left the gym I looked at those huge construction vehicle tires sitting there on the asphalt, weighing 700 and 800 pounds each. Wilen told me his prized prospect Johnnie Langston, an 8-2 cruiserweight, can lift and move those tires all the way to Lime Street and back (about 50 yards). Curious, I tried to lift one of the tires to feel what 800 pounds feels like. Humbled, I could not budge the black mass even a millimeter.

The strengths and benefits of boxing training are immeasurable. And this man Harold Wilen instilled some of it into two of the mightiest tennis champions in history.