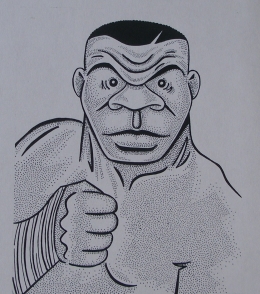 Boxing in America is down in the dumps right now. Not just because of Corona but because there are no money-in-the-bank American stars to sell. Errol Spence? Nobody really cares because he won’t fight Bud Crawford. Deontay Wilder? Exposed as a pretender by Tyson Fury. Canelo Alvarez? Sure, he’s pretty good but he has no Hagler, Duran or Hearns to fight. Canelo is more like a franchise to give the Mexican fans a hero to support.

Vasyl Lomachenko is a superstar in talent but he doesn’t generate the big bucks. Same deal with Artur Beterbiev. Floyd Mayweather and Manny Pacquiao? That fight could generate hundreds of millions but the self confessed coward doesn’t want to box Pacquiao again.

What’s left for American boxing besides a handful of minor events? There is really only one option at the moment and that’s to bring back the ghost of Mike Tyson.

Plans seem to be afoot to revive the ghost of Iron Mike Tyson as by now we all have seen the short video of his sensational punching and still sharp, explosive combinations on the mitts. The flashes of the old Tyson genius are still there. If Tyson can get into good enough shape to throw punches like this for 30 seconds a round, there could be a few more last hurrahs for Tyson. And lots of money.

Sports fans still love talking about Tyson and what he achieved in sports, more so than any other present boxer. Tyson is as famous, or infamous, as Muhammad Ali and he has straightened his life and attitude into the positive force and example he is today.

Imagine…a couple of Tyson early knockouts of some hired patsies like Dominic Brezeale or Travis Kaufmann could spark boxing into a new era of excitement, similar to George Foreman’s magical comeback in the late 80s and early 90s. Everybody would be talking about Tyson again.

Despite how bad, how listless, how deflated Tyson looked in his final fights over a decade ago, there is optimism today from the boxing industry that a successful Tyson comeback could become reality. The World Boxing Council president Mauricio Sulaiman said this week that he will install Tyson back into the WBC heavyweight rankings.

Is the American boxing industry so desperate at the moment that a WWF or real Tyson comeback could be in the making?

As we all know by now…ANYTHING is possible in boxing!