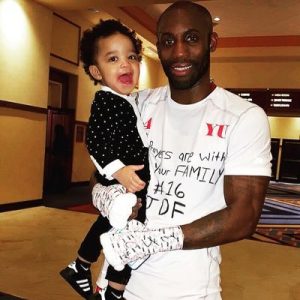 Yordenis Ugas (25-4, 12 KOs), a world rated welterweight boxer born in Cuba and now based in Miami, Florida, has lived in the United States for a number of years and revealed his thoughts and experiences with police officers.

“I want to say this about a country that is not my country, but that I love and respect. I come from a communist country and this country gave me freedom. With its flaws, the police are good. Few are the bad police and the abusers. Racism has nothing to do with the police,” said Ugas this week.
Ugas responded to the political firestorm and media attacks condemning the recent unfortunate death in Minnesota where a black man George Floyd was unnecessarily killed by a white police officer via excessive force.
The 33 year old 2008 Olympic bronze medalist and current leading challenger for WBC welterweight champ Errol Spence is a rare black voice to express vocal support for American police despite the rare isolated incidents such as what happened in Minnesota.
Ugas won his last fight on February 1st against Mike Dallas.
Police Yordenis Ugas 2020-05-27
Scoop Malinowski
Share

Author of six books including "Muhammad Ali: Portrait of a Champion" and "Heavyweight Armageddon: The Lewis versus Tyson Championship Battle" available at amazon
@scoopmalinowski
Previous Why A Mike Tyson Comeback Make$ $en$e
Next Why is Mayweather Ducking Pacquiao Again?

Why A Mike Tyson Comeback Make$ $en$e
Why is Mayweather Ducking Pacquiao Again?