The boxing empire of Al Haymon is in critical condition. And it may not survive beyond 2021.

Boxing is a star-driven sport and Haymon, despite years of trying to manufacture stars on network bought time and Showtime and Fox telecasts, has nothing to show for it other than a stable of B and C level attractions.

Deontay Wilder was the great Haymon hope but he’s still burning in the ashes after being brutalized by Tyson Fury. Adrien Broner is still a juvenile delinquent pretending to be a boxing champ and because of his incurable habit of breaking the law, he has no chance of ever evolving into a money maker.

Gervonta Davis? A protected fraud who has been steered away from Vasyl Lomachenko and Tevin Farmer. Davis is being groomed to be a franchise but the public hasn’t bought nor will they. Sports fans have had enough of in house set ups.

The Charlos? In the 90s they’d be a good filler on a big Don King card underneath a Tyson or Chavez title fight but again, they don’t sell on their own. They are good fighters but nothing special.

Errol Spence was being positioned to be a big star and he generated impressive live gate numbers in Dallas – or was Mikey Garcia the real A side draw? -but since his Ferrari crash and multiple injuries, no one knows if Spence is damaged goods or not. Haymon would not match a fully healthy Spence vs Terence Crawford, so you can take it to the bank Haymon will never let his last meal ticket Spence sign any contracts to battle Crawford. Thus, Spence has no chance to suddenly explode into a Pacquiao or Tyson or De La Hoya level sensation.

Haymon still can recycle Keith Thurman, Danny Garcia, Luis Ortiz and Dominic Breazeale, but none of them draw or sell anything significant.

Haymon is clearly at the end of his controversial run in pro boxing. He’s on the outside looking in. The only big money super champions who can generate big business are all fighters he has no control over – Tyson Fury, Anthony Joshua, Canelo Alvarez, Lomachenko, Artur Beterbiev.

So far, reports say Haymon has already burned through over $400,000,000 in boxing, trying to create money making stars who could generate hundreds of millions per fight. It’s never going to happen.

So don’t expect to see much more of PBC or Al Haymon in boxing down the road. A year or two at best.

Author of six books including "Muhammad Ali: Portrait of a Champion" and "Heavyweight Armageddon: The Lewis versus Tyson Championship Battle" available at amazon
@scoopmalinowski
Previous Why is Mayweather Ducking Pacquiao Again?
Next Mayweather Ruined Boxing In America 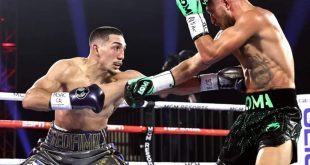