HOBBIES/INTERESTS: “I like to play around with the stereo and equipment…much to the dismay of my wife [smiles]. When I’m home (Encino Hills, CA), I make sure the garden looks great. (Do you play any tennis or golf?) No, bad back.”

CHILDHOOD DREAM: “Maybe becoming a newscaster or a DJ.”

PRE-FIGHT FEELING: “Not as excited as I used to be, because I get more pressure on myself. Everybody wants to get announced and introduced. I try to lay low. Popularity is great, wonderful and pays well. With a lot of it, comes a lot of glad-handing, Hello, how are you? I try to stay invisible till I get in the ring and do my job.”

INTERESTING FACT: “My biological father (Joe) saw me on TV (’89). I was doing a show in Reseda for TenGoose on local cable (’89). That’s how I met my father. He was in LA. He told me his father, my grandfather, was Johnny Buff, who was the World Bantamweight champion in 1921.”

FAVORITE TV SHOWS: “All In The Family, Larry Sanders Show. Still a sucker for Warner Brothers cartoons, Bugs, Daffy, the Tazmanian Devil. And The Simpsons. Especially because I was a guest star on (it).”

FUNNY MEMORY: “Doing a show in San Antonio, Jesse James Leija’s kid brother (Louie) was on the undercard. He was 17 or 18-0 all by knockouts. His opponent came in the ring wearing shorts that hadn’t seen the laundry in a while, pair of sneakers. And a really lopsided record going the wrong way on the right side. Half way through the first round the crowd roared. I looked up and saw someone knocked stiff. So I got the time from the timekeeper for my announcement. Then right after I announced it, I heard a voice behind me. ‘Excuse me, Mr. Buffer, it was me. I’m the winner.’ I announced the wrong winner. So I learned I’ve got to pay attention [smiles].”

GREATEST BOXING MOMENT: “Getting the work in Germany. Because that’s where I met my wife. I do a lot of fights there. I started doing Henry Maske (Light Heavyweight title) defenses from around ’94 till he retired. Met my wife in Dusseldorf through a mutual friend.”

MOST PAINFUL MOMENT: “Probably when Jimmy Garcia ended up dying after a fight (vs. Gabriel Ruelas). That was painful. You knew what was going to happen when he got carried out.”

FAVORITE MEAL: “Roast turkey with all the fixin’s.”

FAVORITE BOXERS: “Sugar Ray Robinson – the very best of all-time. Muhammad Ali, of course. From the 1960 Olympics to this day. Some fighters that some people wouldn’t consider Hall of Fame but did great things on sheer guts. Like Iran Barkley, he became a three-time world champion. George Foreman in his second career. When George lost the fight to Holyfield, Holyfield, as great as he went on to be, he was a couple of notches below what he was before that fight. Brutal fight. That was Foreman’s first heavyweight fight to go the distance. Some of the shots Big George got in there were really wrecking balls. They took a toll on Holyfield.”

PEOPLE MOST ADMIRED: “People that legitimately stand for what they believe in and it is universally considered the right thing to do. That would include Muhammad Ali and Dr. Martin Luther King Jr.”

FUNNIEST BOXING PEOPLE: “Besides almost all the writers, Akbar Muhammad. A sick but lovable sense of humor. Probably have to put myself in. When I get to know people, I like to have fun. When the ref is in ring center giving the boxers his instructions, I’ll pull his belt loop…when he’s on camera. Give it a little pull. My prime target lately has been Kenny Bayless. Kenny’s a great guy with a great sense of humor. One time Frank Cappuccino just reached back and slapped my hand [smiles].” 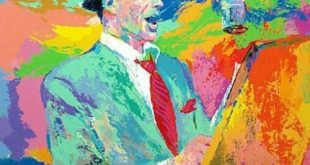 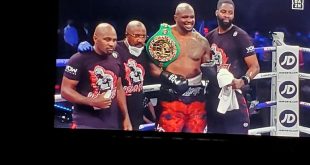